Should You Use R or Python For Data Analysis? 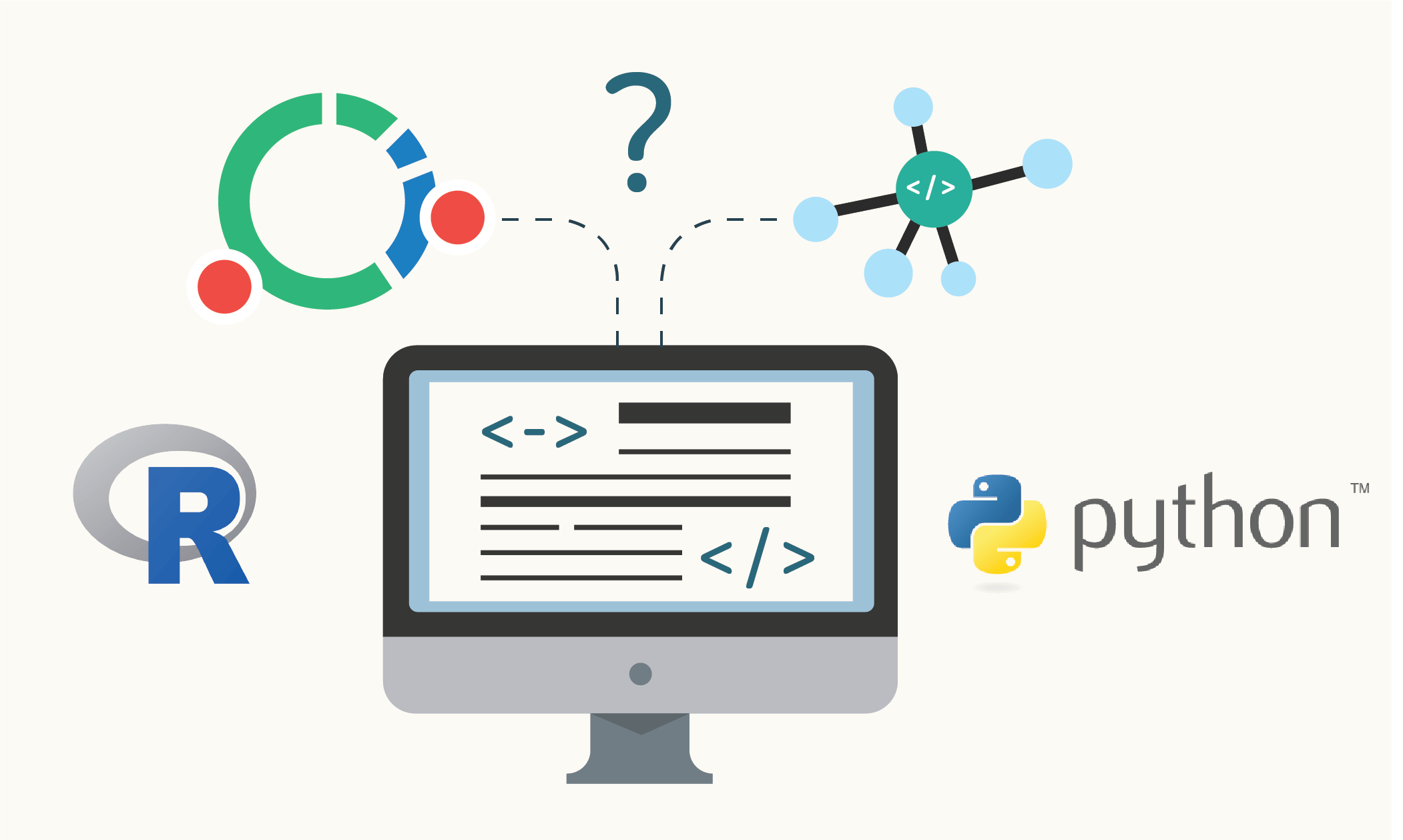 Should You Use R or Python For Data Analysis?

What is a Programming Language?

A programming language is a special language that programmers, data scientists, and data analysts use in order to make scripts, software programs, and other sets of instructions for computers to implement.[3] These are composed of a set of grammatical rules and vocabulary that control the output and behavior of machines in order to create accurate algorithms.[4] Programming languages are often divided into two components: syntax (form) and semantics (meaning).

The syntax of the programing language is the set of rules that outlines the combinations of characters and symbols that accurately structures a particular document or fragment. Semantics describe the meaning of the language instead of its form. In programming languages, syntactic processing often comes before semantic processing. However, there are cases when these are done concurrently, as some languages require semantic processing to complete syntactic analysis.[5] As become more familiar with programming languages, you will understand that syntax and semantics are equally important.

The Role of Programming Languages in Data Science and Analysis

As previously mentioned, programming languages are one of the backbones of data science and analysis. Without them, the processing of data, especially big data, would be extremely time consuming and inefficient. Programming languages have various specialized uses in data science and analysis. Each work together in order to help companies and managers make executive decisions that are guided by qualitative and quantitative research.

Another function of programming languages in data science is data visualization. With this function, graphics can be made that accurately reflect the results of the data. This makes data presentation and analysis easier to understand. These programming languages also allow graphics to be easily embedded or presented in modern web browsers, making the research more accessible to those who need it.[7]

R and Python: A Brief History, Features, and Recent Changes

R is used by various large corporations for data analysis, reporting, and data visualization, including Facebook, Microsoft, Google, and the National Weather Service.

What makes R special is that it is a procedural language instead of an object-oriented one. This means that R relies on step-by-step subroutines in order to execute a particular programming task. R utilizes programming procedures that operate on data, instead of just bundling them together as parts of objects. With this particular element, complex and intricate operations can have clearer visibility. However, this means that unlike object-oriented programming languages, R needs more lines of codes and algorithms.[10]

In the recent years, R has been upgraded to be more productive and efficient. The addition of Feather helps to speed up data collection. R data sets can interact with SAS, Stata, or SPSS through the addition of Haven. Finally, its Readr function allows transformation of the often inconvenient read.csv files into faster versions.[11]

R uses Leaflet and Tilegrams for data visualization. The former makes interactive and embed-able maps available in web applications. The latter function can make maps, graphs, and illustrations that are highly accurate, making data visualization clearer and more detailed. It also has htmlwidgets, which makes Java visualization accessible. Other recent upgrades include Dplyr, Broom and Tidy_text, which are helpful for data cleaning and transformation, as well as TensorFlow and MXNet which helps in its modeling process.[12]

Python is a fast and efficient programming language that is built to handle large amounts of data. In its bid to make programming more user-friendly, Python made a conscious effort to put emphasis on code readability, as well as working towards establishing a platform that could perform functions from various programming languages.[13] People without background in programming languages find Python relatively easier to understand (especially in learning syntax). For that reason, users master this language faster compared to other programming languages. Since Python is more object-oriented, programmers and data analysts can express concepts in less lines of code, making commands easier to implement and understand.

Python’s flexibility is what makes it one of the top programming languages today. It has an extensive set of libraries that makes it possible to perform a wide range of tasks and functions. Firstly, it has a software library made especially for data manipulation and analysis called pandas. This is Python’s main library, and it allows Python to perform various functions, including but not limited to data manipulation with integrated indexing, reading and writing data, and pivoting and reshaping of datasets. Other examples of Python’s other libraries include NumPy and matplotlib. These allow Python to perform plotting and analysis like the ones in MATLAB, an expensive data analysis software, in an open-source software.[14]

Like R, Python has also undergone many updates and changes that have transformed it into the flexible programming language that it is today. Python has Feather, Ibis, ParaText, and bcolz that use binary formats to assist in data collection. These functions also allow Python to access datasets from local Python environments and remote storages like SQL or Hadoop. Apart from these, collecting data is also made easier with the compression function and a CSV reading of up to 2.5GB per second.[15]

Python has Altair, Bokeh, and Geoplotlib to assist with data visualization. Altair is basically like matplotlib, but more user-friendly. With this, you can create tidy and beautiful visualizations that make data analysis more understandable. Bokeh is a component that allows interactive visualization on web browsers, while Geoplotlib allows users to create simple interactive maps for visualization purposes.

Modeling, data cleaning, and transformation are also made more efficient with Python’s recent updates. Blaze, which is like a NumPy for big data, can query data across a wide array of data storage systems. Its other data cleaning and transformation functions, like xarray and dask, perform n-dimensional data and allow the execution of parallel computing. These are just some of the many functions are made easier and more accessible by the Python programming language.[16]

The Comparison between R and Python

R and Python have many overlapping functions. As mentioned earlier, R was specifically designed to cater to the data science and analysis industry. Python, on the other hand, is a more general programming language, and was built to perform a multitude of functions including data engineering, data munging, data wrangling, web app building, and website scraping. Below are some points of comparison between R and Python:

Even though R is still the leading language used for data analysis, there is evidence that Python is quickly climbing up the ranks as the more preferred platform by newer users.[17] 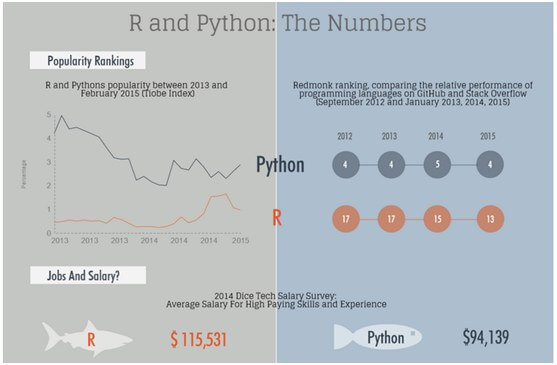 There are two main reasons for this change in user preference. The first is that Python allows users to perform most of R’s functions, while also featuring other functions that fit into the general mold of programming. The second reason is Python’s learning curve. Users find it easier to learn the object-oriented language of Python (see figure 2) compared to R’s procedural language. Overall, Python is better than R at user-friendliness and understandability. 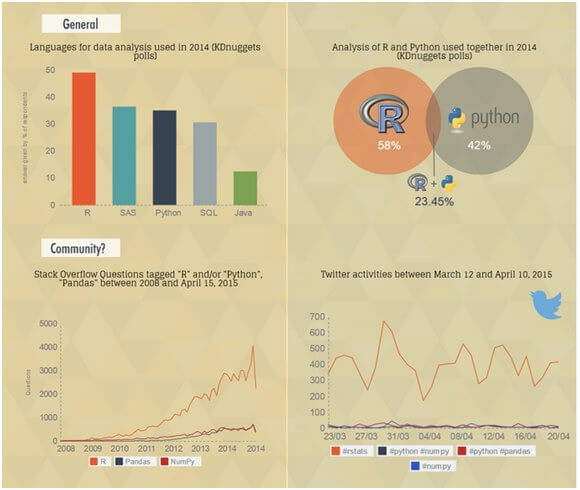 When R was initially made, the idea of processing big data was not taken into consideration. For that reason, former versions of R software had issues when computing large datasets. However, the introduction of R by Revolution Analytics improved the R’s data processing speed. Now, the computation intensive operations in R is incredibly fast, beating the relatively slow processing of Python’s high-level language.[18]

Plotting data to showcase patterns and simplifying data presentation is extremely important. The R software has a reputation for making graphs and tables that are worthy of being issued in top publications. For this reason, many users assume R is best for quality data visualizations. However, Python has recently updated its visualization capabilities. Not only does Python have ggplot (which is one of the data visualization features of R), but it also now has seaborn and bokeh, features which make interactive visualization possible. Although each has its strengths, R and Python rank similarly for data visualization.[19]

The ability to process large amounts of data (big data) is becoming increasingly important for programming languages. On its own, R has a bit of difficulty when it comes to dealing with big data. This is because it stores the data in the system memory (RAM). Python, on its own, is relatively better at handling big data. However, since both R and Python have HDFS connectors, the integration of the infrastructure of Hadoop gives substantial improvements to the performance of both. Therefore, although Python without add-ons is better than R, both perform equally in handling big data when using HDFS connectors.[20]

The Bottomline: Which is the Better Programming Language?

Overall, each language has its strengths. Which language you prefer greatly depends on your preferences in what you want to the language to accomplish.[21]

The R Foundation. (n.d.). What is R? Retrieved from R: https://www.r-project.org/about.html

Keenan, T. (2016). R vs. Java vs. Python: Which Is Right for Your Project? Retrieved from Upwork: https://www.upwork.com/hiring/data/r-vs-java-vs-python-which-is-best/